Arranged roughly in the order the scenes are in the Director's Cut.

(Click on any pic for more info about it and to see it at its full resolution. Images are constrained here to fit this format.)

Scouting before the filming began

Christopher Lee and Edward Woodward by a canon at Culzean. (Brown says this on the grounds of Lochinch Castle.) Proabably taken on the same day as the other shot of them with the Earl of Stair, before shooting started that is seen in the Brown book. (pg 465 of the iBook)

A cropped pic of the same scene.

Hardy, Lee, James (Jimmy) Miller, the Provost of Girvan, and Woodward at an unknown location in Ballantrae. Possibly on the same day as these other shots, Oct 4, 1972? The caption of the Galloway Gazette of 12/4/98 says, "Film stars Christopher Lee (second left) and Edward Woodward discuss filming location in Ballantrae with director Robin Hardy."

A shot of Howie being rowed ashore In Stranraer.

Gary Carpenter as the organist (in drag). Robin Hardy as a minister for his cameo. (Greyfriars Episcopal Churchchurch in Kirkcudbright.)

Robin outside that church (Greyfriars Episcopal Churchchurch in Kirkcudbright)

Howie in his plane

When his plane won't start

Below is press photo WMX 6 "Director ROBIN HARDY lines up a shot with EDWARD WOODWARD during location filming of THE WICKER MAN at Plockton Harbour, Scotland," 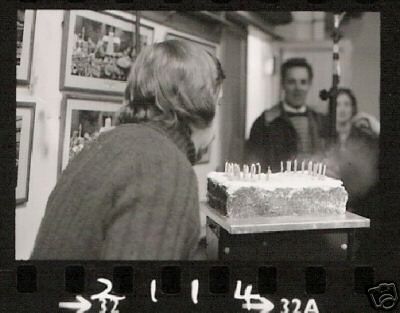 Robin Gregory, Paul Giovanni. I am not sure who the man in the turtleneck is.

Britt giving Edward a message. (Not a missing scene...)

Same as the publicity photo but this shot includes a crewman. (18 High St, Gatehouse of Fleet.) 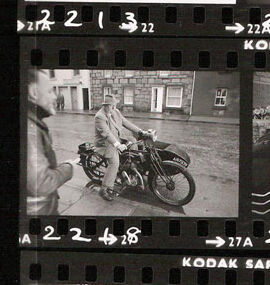 Is that Harry Waxman in the white cap?

The same picture as above but the aspect ratio is different. 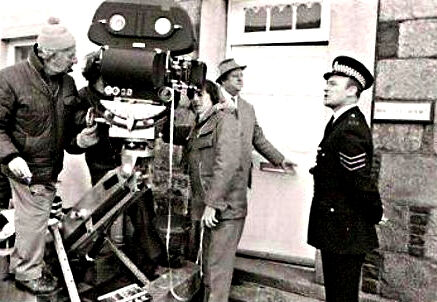 Press photo labelled WMS 8 "On Summerisle, children are taught that the maypole is a phallic symbol. Police Sergeant Neil Howie (EDWARD WOODWARD) is astonished to hear the boys singing a bawdy song as they dance round it." 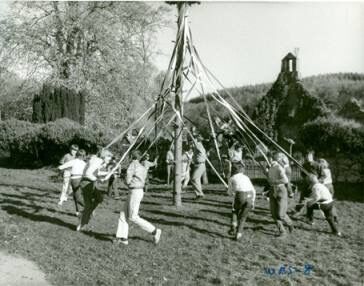 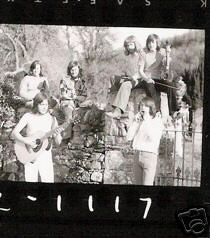 An unknown shot, probably by the schoolhouse, showing the crew and the fake cherry trees.

An unknown scene being shot possibly at Anwoth. We don't know.

See also the Richard Demarco archives for 3 more pics of the Maypole and one showing the schoolhouse. 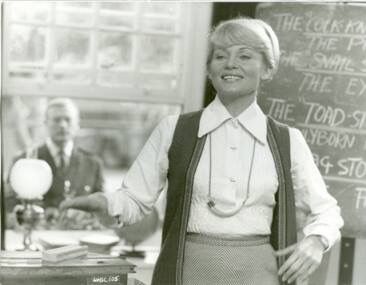 txMiss Rose and Howie at the blackboard before it was erased. 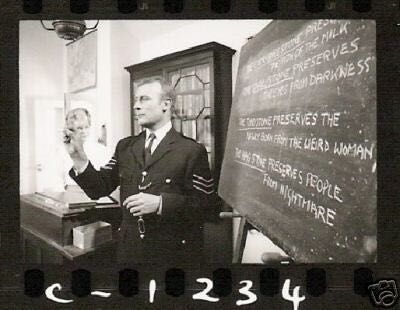 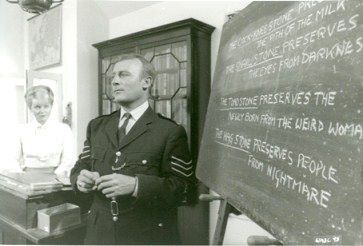 Look for a Polaroid pic of the dancers taken by James Fitzsimmons, the son of the butler to Lord and Lady Stair, in Nuada #3, in the article titled What The Butler Saw. (Don't expect good quality...)

Thanks to Alan Linda McGhie's father, we have these priceless shots of this scene being shot in Whithorn by the library.

First, Howie being prepared by the crew.

Then a shot of the kids having already passed the library.

A shot from Charlotte Bennie of the Whithorn History Facebook group. The crewman to the left of Howie in the sheepskin jacket is also seen in the Plockton home movies.

The Search for Rowan 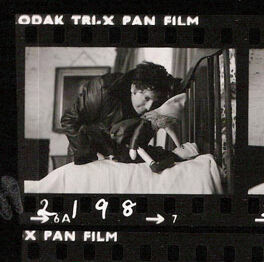 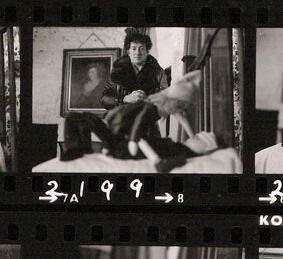 He may be in the background in this shot. 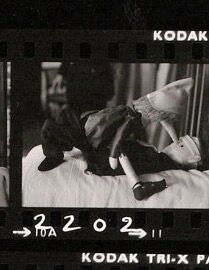 Howie about to smack the dolls away. 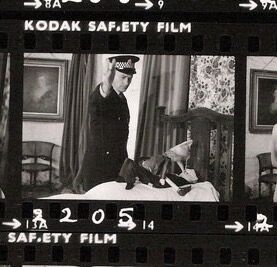 See also this pic of #2 George St which appears to be taken from the other side of the door.

On the beach in front of St. Ninian's cave, it looks like they are setting up where the horse and cart would be. You can see a tractor in that spot.

The crew preparing Broome and Rowan. Howie is not seen.

A similar shot, this one showing Broome walking towards Howie. That might be Robin Hardy in the dark outfit half-way up there.

Four of the antler dancers relaxing.

The cast and crew around the hole where Rowan would emerge.

This looks like a scene where Howie is surrounded or is perhaps being anointed.

The Hero man being constructed.

Seamus Flannery standing by the dead tree, on the right, as it was installed.

Note the guard rails around the man.

With crew and cast

2 versions of the same shot, the first sharper, the second larger.

(Some supplied by Dorothy Compton, his granddaughter.)

(Note that she has the poodle but where did the child go?)

Howie and Willow by the cliffs 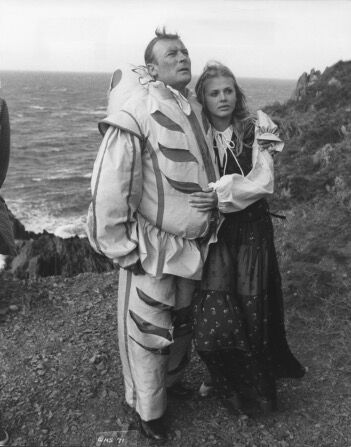 Lord Summerisle and Willow waiting. We don't know who the other man is. 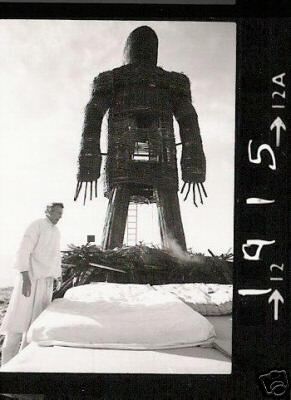 (3 versions of the same shot, 2 cropped differently, one larger.) 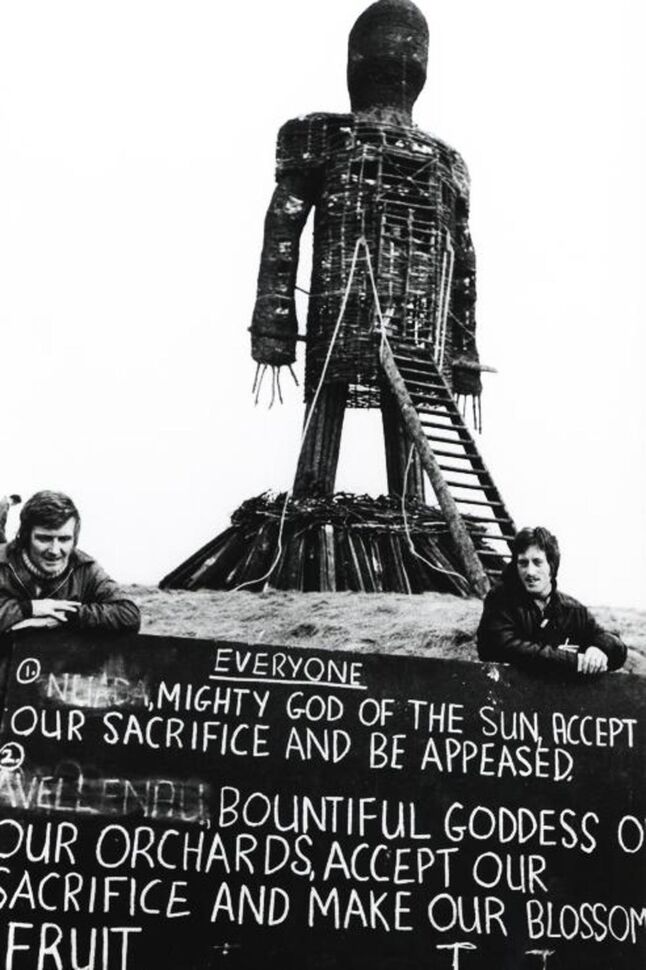 The Wicker Man on fire 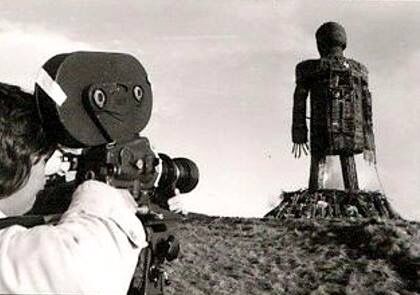 The firemen hosing it down.

A similar pic slightly to the right of that.

Perhaps the most valuable behind the scenes pic I have seen... the crew filming the final shot.

A pic from Elliot Robb who was a fireman on-site.

See also the Richard Demarco archives for 3 pics of the Wicker Man.

Some of the men at Keeley Hire (Film and Television) Ltd near London who built the "men" preparing one of them to be shipped up to the site in Scotland. 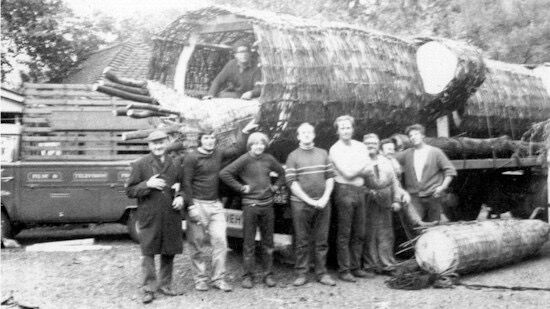 One of the crew and Edward Woodward at 2 George St, Whithorn, the house of Byron Chamberlain. We don't know why they were there. (Behind the scenes) (Photo couresy of Dorothy Compton and Phil Heslop.)

See also this pic which appears to be taken on the other side of this door. (Last pic in the "search for Rowan" set above.)

Some of the cast at the Kirroughtree House Hotel.

Retrieved from "https://twm.fandom.com/wiki/Behind_the_scenes_-_still_pictures?oldid=10361"
Community content is available under CC-BY-SA unless otherwise noted.